Smiling Report 2020: North America smiles and greets the most while there is a worldwide tendency of increasing the add-on sales

Smiling Report 2020: North America smiles and greets the most while there is a worldwide tendency of increasing the add-on sales

MSPA Europe/Africa has released the 2020 Smiling Report in cooperation with Better Business World Wide and Surfmerchants, for 16th year in a row. The report analyses customer service data from evaluations conducted across a whole spectrum of industries in Europe, Asia, North and South America. The 2020 report provides a summary of almost five million answers to questions focusing on Smile, Greeting and Add-on Sales metrics from 68 countries during 2019. Client X took part in the survey for 11-th year presenting the data collected by mystery shoppers in Bulgaria.

Overall 81% of customers received a smile, 75% were greeted, while 68% received an add-on sale suggestion. The aggregated scores were the same for smiling, but decreased  by 8% for greeting compared to 2018.

Georgia ranks first for giving smiles. The results for the country were registered for the first time as part of the research, setting an excellent start in the ranking with as much as 99%. Among all continents, North America is once again with the best performance in terms of greeting with a score of 87%, despite a slight negative difference compared to 2018. Europe has the lowest overall score for greeting the customers for the first time since 2008 (73%), while Asia marked a significant increase of as much as 14% and a result of 80%.

The highlight of the results is the significant positive change in the level of add-on sales - an increase of 19% from 49% in 2018 to 68% in 2019. The promotion of additional products and the realization of more sales not only lead to higher revenues for the company, but also improve its image and overall sense of attention during customer service from the consumers’ point of view.

How does Bulgaria present itself?

In Bulgaria the salespeople smile at their customers almost as much as the average level for Europe and for the world, greet much more often and make half the effort to make additional sales. Bulgaria ranks 10th with a 92% success rate in greeting customers, which is 5% higher than in 2018. Again, the indicator evaluating the attempts to make additional sales has the lowest percentage, as in 2019 it reached the lowest result for Bulgaria since 2010 (38%). 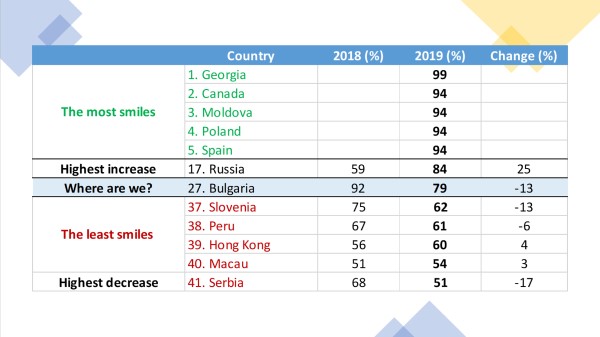 For the 11th year in a row, Client X collects and presents data for Bulgaria as part of the survey for the annual Smiling Report. This year the object of study is, again, the quality of service in more than 10 industries in the country, among which are banking and insurance, telecommunications services, fuel and electricity trade, car dealerships, chain stores and more.

You can find more details and analysis of the results of the latest Smiling Report 2020 here.