Attitude towards the COVID-19 situation in Bulgaria, March 2020

Attitude towards the COVID-19 situation in Bulgaria, March 2020

We would like to thank everyone who took part in our survey! As promised, we are sharing the results with you. The survey was conducted between 23-27 of March. 519 people participated, and the share of ladies who completed it exceeded the share of men.

We started by finding out how people perceive the risk of COVID-19 in relation to the country, as well as personally. The data show that the respondents see the risk for the country (72%) as greater than the personal one (55%).

The level of importance of the problem determines the intensive follow-up of information on the topic. The data show that 45% of all respondents get informed on average between 2 and 3 times a day, and 17% - almost constantly. The main sources of information are television (84%), news websites (62%), social networks (58%) and official press releases of the Government and the National Operational Headquarters (58%).

We sought people's opinion given all the information they have about how long the state of emergency in the country will last. One in four people (25%) is of the opinion that it should end within a month, but 56% of the respondents estimated that it will last between 2 and 3 months. 16% of the interviewees are even more pessimistic – according to them the state of emergency may last more than 3 months.

We asked the people how long they think it will take to recover from the effects of the crisis – for the country as a whole and on a personal level. One in two is of the opinion that it will take more than a year for Bulgaria to deal with the consequences (55%). Almost all respondents believe that there will be such in economic terms (97%), 44% are of the opinion that it will affect us socially, and 39% – in health.

However, the interviewees are more optimistic about their personal situation –  60% think that it will not take more than 6 months to deal with the consequences on a personal level, and 6% are even of the opinion that there will be none consequences for them at all. The biggest concerns that respondents express are that they and their loved ones may suffer from health problems (58%) and lose their job or part of their income (57%), with 26% even fearing that they may fail to pay their credit obligations on time. 38% will skip the family vacation this year, and 26% will not attend planned visits to interesting cultural or sporting events. 18% of respondents will postpone large purchases such as a car or home.

Our aim was to find out how the state of emergency has affected our respondents personally too – how it has changed their way of life, communication, planning, consumption, etc. The data show that three out of four observe the restriction not to visit public places (76%), as well as their relatives (73%), and 72% admit that they wash their hands more often than usual. 61% of all respondents rely on being well informed to protect themselves and their loved ones. Only 38% of all respondents manage to work from home. In other words, the majority of interviewees have to deal with restrictions on urban mobility during a pandemic. Every other person wears a mask when outside (56%), and every third – gloves (37%). Regarding the organization of their daily life, 30% of the respondents have set certain hours in which to visit shops. 42% of the all have already postponed their trips and planned vacations.

According to the results, most of the people asked have changed their consumer habits as a result of the epidemic (only 28% say that there is no difference for them). Every other person restricts their purchases by not buying anything other than food and medical drugs (51%), but 18% admit that they buy food more often than before. Some respondents begin to use online banking when possible (29%), however only 10% say they have started shopping online. One in five uses their contactless credit/debit card more often (24%), and 14% have prepared with more cash than before.

The feel of anxiety and fear associated with the infection of COVID-19 is strong – two thirds of all respondents admit that they are afraid, with 21% describing the fear as strong. In case of infection, the majority of respondents will follow the advice of the National Operational Headquarters – to call their GP and follow their instructions (80%), and 8% admit that they would try to treat themselves as with a common flu.

Respondents generally support the measures taken by the National Operational Headquarters and the official authorities to reduce the infection. Two thirds of respondents believe that it is right to limit visits to green spaces in cities (68%), with 75% saying they respect these bans and 14% admitting minor exceptions. Overall, the observations for other people confirm the general tendency to comply with the restrictions – 86% believe that others comply with these requirements in full or with few exceptions. 61% of the respondents also approve the imposed access regime at the entrances and exits of the regional cities, and 7% are of the opinion that such a regime should be imposed for smaller towns as well.

Finally, we asked our respondents about their trust in several specific institutions and public/political figures. The data show that of all the above, the respondents trust the most the Head of the National Operational Headquarters for Fight with Coronavirus Pandemic in Bulgaria – General Ventsislav Mutafchiyski (76%), and logically right after him in the trust ranking is the National Operational Headquarters itself with 73%. The President of Bulgaria Rumen Radev received the support of 57% of all interviewees, while the Prime Minister Boyko Borisov received 41% and the Government itself – 43%. It is interesting that the political figure of the mayor of the city or town where the respondents live receives relatively high trust rate (52%), but not the local municipal council (36%). The National Assembly appears to be the least trusted – only 20%. 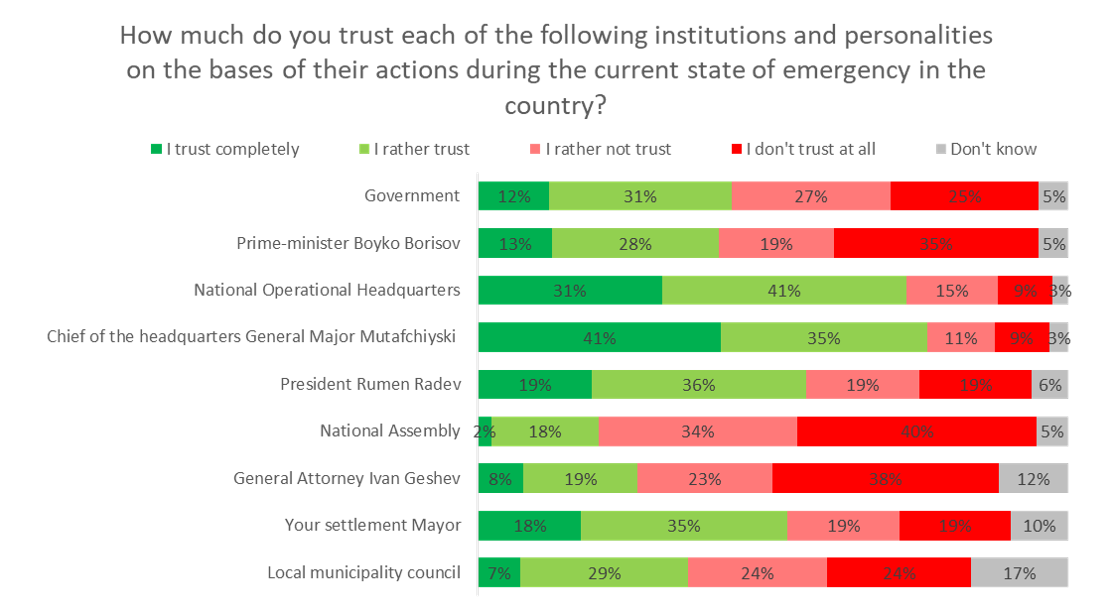 The data was very interesting for us, hopefully for you as well! We will soon repeat the study to measure the dynamics - whether attitudes are changing and in what way.

With best wishes for health,