In March 2017, for the first time in Bulgaria an independent mystery shopping survey war run in travel agencies. Two organizations were in charge of that – one of the first and largest Bulgarian companies for mystery shopping, Client X, and the largest tourism conference in Bulgaria, Travel Academy. The objective of the survey was to check the service level in the agencies, define the weaknesses and strengths, and see what could be done in order to improve not only the travel agencies, but the industry in general.

The survey and its results were initially presented during a press-conference in the Bulgarian News Agency before the national media. One week later, in the end of March, during the conference Travel Academy Iva Gospodinova from Client X presented once again the results, but in much greater detail, before representatives of travel agencies, as well as of hotels.

Presentation of the results during the press-conference in the Bulgarian News Agency – March 2017.

In its capacity of specialist in the industry, Travel Academy selected the travel agencies to be surveyed and created scenarios to be played out by the mystery shoppers. We chose bigger and renowned companies that offer holidays abroad in order to achieve comparability of results. All offices are located in Sofia. The scenarios were for holidays in popular destinations and guidelines were issued on the profiles of the mystery shoppers in order to make them as authentic as the ones of the real clients.

Three scenarios were played out. One of them is for a married person with a child looking for a holiday in Antalya, Turkey, for one week in May, in a 5-star hotel and could spend 2 000 – 2 200 BGN. In the case of the second script the secret client would once again pretend to be a married person looking for a holiday in Sicilia, Sardinia or elsewhere in Italy for a week in June, in a 4-star hotel and has a budget of not more than 2 500 BGN. In the case of the last scenario the profile was also of a person interested in a family holiday in Khalkidhiki or the Olympic Riviera for a week in September, would like a hotel at the first sea line and has 2 500 BGN.

Several basic components were assessed – exterior and interior of the offices, welcoming, employees’ appearance, communication skills, attitude towards the client, competency level, sale skills, as well as coping with client’s objections whereas the holiday seems too expensive to him/her or he/she would like to get some discount.

What are the results of the mystery shopping?

The results of the visits paid show the travel agencies welcomed the mystery shopper with a very good base, since offices’ street appearance and interior were in excellent condition. Nevertheless numerous critical areas were noted. Even though the employees were with a professional appearance in general, very few of them were wearing badges with their names on. Most probably that is not requirement towards them, but it definitely creates higher trust in the clients that would like to know whom they are talking to.

In general, the employees were polite, but during the communication, identification of customer needs and offering in line with one’s needs proved problematic. The employees didn’t ask enough questions and relatively rarely asked for the family status, and even less often whether the client had visited the particular destination. Nevertheless, what is even more worrisome, is that there are employees who didn’t ask about the duration of the holiday, the customer’s requirements towards the hotel, the budget and the type of catering he or she prefers.

On few occasions advertising materials were utilized in order to show the destination, the hotel and in general the offer, and on few occasions the customers were provided with advertising materials. The results are troublesome when it comes to offering a follow-up contact. The employees didn’t offer getting in touch with the customer again, rarely asked them for their contact information and didn’t provide any business card. That type of service does not show engagement with the customer’s interest in their offer, and on the other hand does not provide them with the opportunity to additionally contact the employee, should he or she has further questions.

A significant difference was observed in the results of the various agencies. The highest result is 93%, while the lowest is 54%. The agency with the highest result coped the best when it comes to the main critical areas, namely: “Communication skills and attitude towards the client” and “Competency and sales skills”, and the one with the lowest result showed poor presentation under the same criteria.

For the purpose of the telephone checks, we used the same scenarios. In that case it is worth mentioning that all calls were answered until the third free signal, most of the employees presented the name of company, they were polite and friendly, listened to the customer and ended the conversation in a polite manner and with a greeting.

The critical aspects in that area were not a few. For starters, even if they presented the company, the employees didn’t introduce themselves with their own names. Just like in the case of the visits, it is an important aspect so that the customer knows whom he or she is talking with and trust them better.

Only 40% asked how they could help the customer, i.e. more than half the employees didn’t show much interest in the beginning of the conversation. Nearly 1/3 didn’t ask questions in order to specify the customer needs, but even approximately half of those asking questions didn’t summarize what the client was interested in. Additionally, during no single call the employee offered the customer to visit them on the spot in order to discuss in greater detail what he or she is looking for. Bearing in mind the number of employees revealing customer needs, quite logically only 66% made a suitable proposal. Around 2/3 promised to send an offer via email. Nevertheless around 1/3 of them didn’t do it.

In the case of the phone calls we could also see there was a problem with the follow-up contact and feedback. In very few of the cases (14%) the employee offered the customer to call again and rather by exception (28%) the customer was asked to leave a name and number. That shows once again that the employees in general didn’t show enough interest in whether the client would like the offer and would take it.

Which are the most important observations?

Several main positive and negative aspects stand out that were observed both during the visits and during the telephone checks.

The initial impression created by the travel agencies is very good since they have hospitable and modern offices, they answer the telephone calls and greet the customers. In general, the employees were polite at the time of welcoming and seeing the customers off.

On the other hand, during both types of tests we noticed the employees didn’t demonstrate enough interest in the customer needs in order to offer the best, hence they didn’t make suitable proposals on enough occasions. Additionally, they didn’t establish sufficient trustworthiness since they didn’t identify themselves with a name badge in the office or with a name via telephone. Another negative aspect we observed during the visits as well as during the phone calls is that the information was not sufficient and no materials were presented.

It is not surprising that the company with the highest result in March 2017 had assessed the work of its employees via “mystery shopping” before, and subsequently had them trained additionally.

The “mystery shopping” method is a valuable tool for companies that would like to identify the weaknesses in their service standards, correct them and monitor them in the future. Continuing the survey among the agencies would be highly effective namely in that direction – to follow up whether the training of travel consultants and providing them with additional incentives would help the clients in getting better service and attitude.

More information about the survey

You can view and download the presentation from the conference below.

Travel Academy 2017 is the fourth conference in a row aimed at the interests of travel agencies and hotel-keepers. As soon as its first edition was held in 2013, Travel Academy was positioned as a leading event for each and every employee, manager or business owner in the tourism industry. In 2 days’ period (30 - 31.03.2017) hotels, travel agencies, airlines, websites for purchasing airfares and many others learnt about the new opportunities provided by the innovations in marketing, management and sales. Iva Gospodinova from Client X was a lecturer of the topic “The power of good service and how to achieve it” (in Bulgarian). 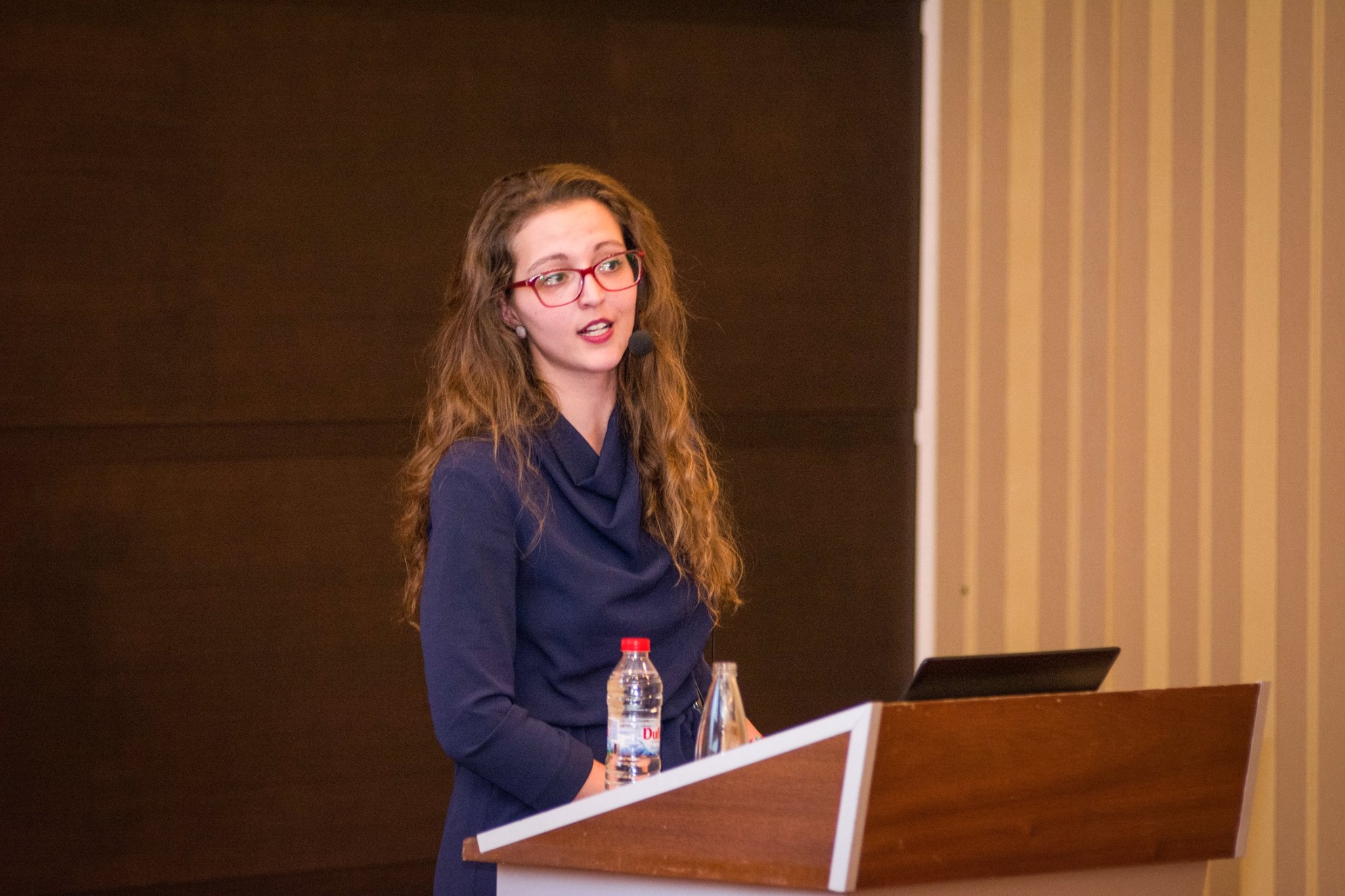 Iva Gospodinova from Client X was a lecturer of the topic “The power of good service and how to achieve it”.

The event was also covered by the following media: