Harvard Professor Shoshana Zuboff said that every century or so, fundamental changes in the nature of consumption create new demand patterns that existing companies can’t meet unless they applied imagination to see beyond what they’re selling today. Indeed, consumers have never been savvier, well connected, and value conscious.

Today’s consumers engage with your company in very different ways than they used to.

Meet Mike, your customer in 2015. Mike never loses sight of his iPhone. He’s very opinionated and not afraid to share his opinion using his social media channels (whether good or bad). He doesn’t trust advertising and only connects with brands that he feels are authentic and stand for higher purpose. He publicly admits to showrooming and has been conditioned to expect everything immediately and now.

Are you ready to win Mike’s heart and mind?

It goes without saying that we are in love with our devices. 50% of us check our phones before we go to sleep and as the first thing after we wake up. On the extreme side, a recent study conducted by McCann Worldgroup found that a staggering 53 percent of young people would rather give up their sense of smell right now than give up the technology that they use in their lives everyday. Nonetheless, we are leveraging our devices to support all sorts of decisions. From what movies to watch to what car to buy, the amount of information available at consumer’s fingertips today is unprecedented. For companies of any size, having a strong online and social media presence that connects and engages with consumers is no longer an option.

Yesterday, I went to my bank where I had been a customer for 25 years. I was next in line when I could hear the bank teller trying to upsell the customer she was serving on a credit card. She kept going with the sales pitch for a good 15 minutes while the line-up grew and customers became irate. Whereas in the past this is a situation that might have been unnoticed, people in line (myself included) were tweeting to the bank’s head office saying that it wasn’t acceptable to hold up customers for the sake of upselling someone. Increasingly so, your connected customers are not hesitant to share their opinions with you and the rest of the world. The key is going to be to effectively listen, manage the conversation and take action where appropriate. Never before have businesses had such an opportunity to leverage social sentiment to refine their business strategy, so if you’re not listening and connecting with your customers, you can bet your competitors are.

Have you ever walked into a store to scope out a product or perhaps seek advice, then turned around and bought it elsewhere for a lower price? If so, you (and 41% of consumers) have admitted to practicing “showrooming”. Today’s retailers are facing a serious threat from both online and other brick & mortar competitors where value conscious consumers check multiple sources to find the best deal, despite the level of service or expertise they may receive. To combat showrooming, retailers must do a better job of integrating their online and in-store offerings, with more stores showing the same prices and products across both platforms. Companies such as Target and Wal-Mart have taken recent measures by pushing suppliers to offer it exclusive products that can’t be found elsewhere. In the future, companies will need take their initiatives even further to proactively protect customer interests, going as far as even warning them if they’re making a mistake, paying more than they need to pay, buying too much, or doing anything else they might regret later. If your customer experience is fragmented across channels, you are not only missing opportunities, but you’re literally giving those opportunities away.

While companies are still investing tremendous amounts of money in advertising, customers are increasingly ignoring what ads say. How many times have we seen a mouth-watering burger on television, only to be disappointed when we see it in reality? While advertising is very good at putting ‘lipstick’ on a product and using lifestyle messaging to connect with buyers, customers are increasingly seeing through the façade. This is where companies who are seen as authentic have a competitive advantage as people are instinctively drawn to brands that tell us what they believe. Companies like Starbucks, Southwest Airlines, Apple and Whole Foods have created a cult-like following by simply telling people what they believe in and aligning to their visions to a higher purpose.

We hear of Amazon, DHL and others testing drones and predictive methods to make homes deliveries faster, but why? Giving consumers what they want is not a new development – what is new is the required speed. Consumers today live in a very fluid present and demand instant gratification. They want to get it now, see it now and get help now. Connected consumers are being ingrained to demand instant gratification. As a result, expect your company to have no choice but to finally mirror and join the ‘now’, in all its splendid chaos, realness and excitement.

Are you ready for Mike?? 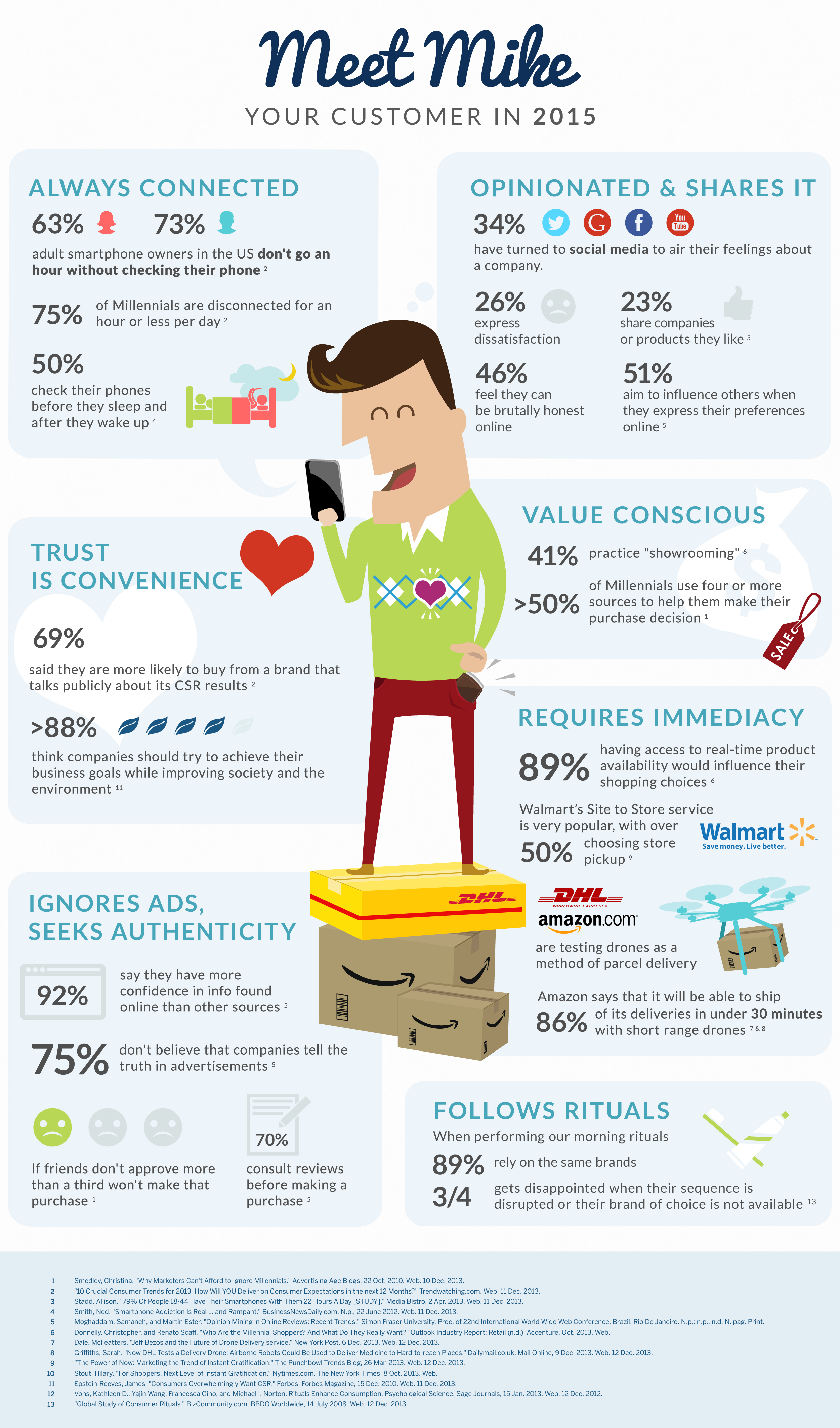 He is a Global Vice President of Customer Strategy SAP, where he’s spent the past ten years working with some of the largest companies in the world. He’s led and executed major transformations at SAP to make the organization more responsive to change and successfully enter new markets.

* The article is re-published with the kind permission from MSPA Europe, which is the Mystery Shopping Professionals Association in Europe. You can read and comment on the original piece on their website. Original date of the publication: 1 April 2015.